Cenicaña presents the fourth approximation of agroecological zoning for the cultivation of sugar cane in the Cauca river valley, in which 156 agro-ecological zones defined by relatively stable biophysical factors were identified.

The zones result from combining the agroclimatic information corresponding to 33 Homogeneous Soil Groups and six Humidity Groups, defined based on detailed soil studies carried out on 216,765 hectares of the flat part of the Cauca river valley and on the calculated regional hydrological balance with a probability of excess of 75%.

The nomenclature of the new agroecological zones is defined by an initial number between 1 and 33 (identifies the Homogeneous Soil Group) followed by the letter “H” together with a number between 0 and 5 (identifies the Humidity Group). Thus, for example, the agroecological zone 11H3 gathers the soils classified in the Homogeneous Soil Group No.11, where the characteristics of the Humidity Group No.3 prevail.

Methodological diagram of the sequence of analysis of the factors taken into account in the fourth approach of agroecological zoning for the cultivation of sugar cane in the Cauca river valley, Colombia 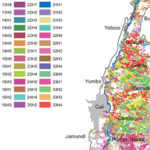