Integrated pest management of sugarcane with emphasis on biological control

It is estimated that there are more than 1300 species of insects associated with the cultivation of sugar cane as its food source (Box, 1953). However, not all of them constitute pests of economic importance for the crop; in fact, and according to regional conditions, only between one and three species are presented as a serious limitation of production. In this regard, Bustillo (2013) mentions that 23 species of pest insects have been detected in sugarcane plantations in Colombia, and emphasizes that among them stem borers Diatraea spp. (Lepidoptera: Crambidae) and spittlebug Aeneolamia varies (F.) (Hemiptera: Cercopidae) are the most economically important pests in the crops of the Cauca river valley, without ignoring that other insects can occasionally produce considerable losses, such as the goat worm. Caligo illioneous Butler (Lepidoptera: Nymphalidae), the mad ant, Nylanderia fulva (Mayr) (Hymenoptera: Formicidae), and others that potentially establish themselves as pests of economic importance in sugarcane plantations, such as spittlebug Mahanarva bipars (Walker) (Hemiptera: Cercopidae), seed weevils Rynchophorus palmarum (L.) and Metamasius hemipterus (L.) (Coleoptera: Dryophthoridae), the winter cuttlefish Podischnus agenor Olivier (Coleoptera: Melolonthidae), and even the giant borer Telchin licus (Drury) (Lepidoptera: Castniidae), which has been reported in other parts of the country and could invade the Cauca river valley region.

In Cenicaña, sugarcane varieties are not selected for their resistance to the pests that attack them, but various alternatives have been investigated and proposed to regulate the populations of these insects, with emphasis on biological control.. Primarily, Among these activities, the various varieties are permanently evaluated with respect to their resistance to attack by Diatraea spp. (Echeverri et al. 2018) and spittlebug (Cuarán et al., 2012), and the response of commercial varieties as well as promising ones against the different insects associated with the crop is permanently monitored, in order to timely and effectively attend any outbreak that represents significant losses to the sector. In addition, work is being done on a methodology for assessing the damage caused by Diatraea under greenhouse conditions in the new varieties, to characterize with greater precision their level of resistance to borers and to identify the resistance factors to these and other pests, which can guide the breeders in their processes of crossing and searching for new varieties ( Echeverri-Rubiano et al., 2019; Echeverri-Rubiano et al., 2017).

The permanent work carried out by the Center to disseminate its findings in this regard, and the constant training of farmers to make them aware of the importance of timely sampling and control of the different pests will allow them not to threaten the sustainability of the plant. industry in the medium and long term. Along the same lines, this chapter contains information on a selected group of crop pests, with an emphasis on stem borers and spittlebugs, as well as relevant information about seed weevils, the mad ant, defoliators, the winter roach and the giant borer. In each case, aspects such as their economic importance, monitoring alternatives and control methods are analyzed.

In the United States, where there are at least seven species of Diatraea (Solis & Metz, 2016), the damage by D. saccharalis (F.) can reduce sugarcane production by up to 28% in the state of Louisiana (Hensley & Long, 1969) and between 10% and 20% in Florida (Capinera, 2009). For their part, Rodríguez et al. (2012) point out that in Mexico stem borers, among them Eoreuma loftini (Dyar) (Lepidoptera: Crambidae), the Mexican rice borer, have become pests of economic importance for the different sugar cane areas of the country, as they produce losses that can reduce crop yields by up to 50%.

According to Badilla (2002), in Central America, and particularly in the case of Costa Rica, borer damage in sugarcane is caused mainly by three species of Diatraea: D. tabernella Dyar, D. saccharalis y D. guatemalella Schaus. The same author presumes that the impact of these pests in this country can represent up to 199 kilograms of sugar less for each percentage unit of drilled internodes.

In Brazil, Parra et al. (2010) have estimated that for each percentage unit of drilled internodes, 1.14% of cane tonnage is lost. Thus, if an average production of 90 tons of cane per hectare and a sugar recovery of 12% is assumed, there would be a decrease of 123 kilograms of sugar for each percentage unit of drilled internodes. The same authors calculate a reduction of 0.42% in the efficiency of the extraction of sugar and a 0.21% in the obtaining of ethanol, for the same concept. For its part, the Ecuadorian Sugar Cane Research Center (Cincae) points out that losses due to D. saccharalis in that country, they can represent between 0.4% and 1.1% reduction in cane weight for every 1% of drilled internodes (Cincae, 2013).

In Colombia, there is a record of at least eight species of Diatraea: D. albicrinella Box, D. busckella Dyar & Heinrich, D. centrella (Möschler), D. indigenella Dyar & Heinrich, D. lineolata (Walker), D. saccharalis, D. tabernella and a new species in the process of description found in the department of Caquetá, Colombia; relegating to D. rose Heinrich and Colombian D. Box to the synonym status of D. busckella (Barrera et al., 2017; Solís & Metz, 2016). In the valley of the Cauca river, D. saccharalis and D. indigenella have been recorded for a long time attacking sugarcane (Vargas et al., 2015a), but in an outbreak of these pests between 2013 and 2014 in the northern and central areas, the presence of D. tabernella y D. busckella (Figure 1) causing high levels of damage, and where different levels of affectation by beneficial insects used in their biological control were observed, which led to the need to propose alternative pest management schemes, such as the incorporation of new natural enemies in the region as the parasitoid larval wasp Cotesia flavipes (Cameron) (Hymenoptera: Braconidae) (Vargas et al., 2017). 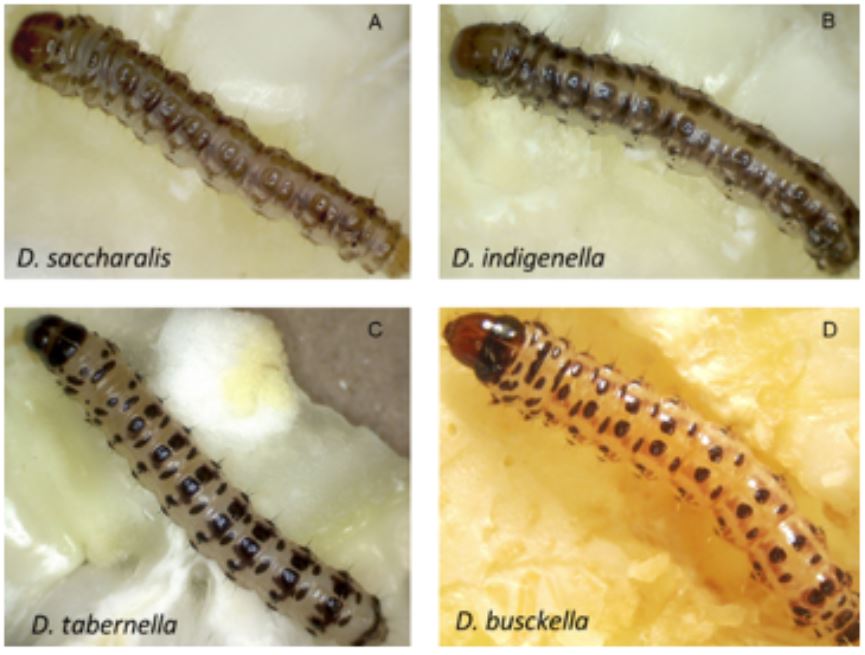 The borers of the genus Diatraea They are also common in corn, sorghum, rice and other grass crops, in which their economic impact is variable, as is their preference for attacking certain parts of the plant at certain times and age of the crop. In the case of the rice agroecosystem of Colombia, the frequency and intensity of the attack of this pest has been increasing in recent years, possibly associated with the low rotation of plantations with broad-leaved crops such as soybeans, the inappropriate use of practices cultural and by the indiscriminate application of insecticides that have eliminated the natural enemies that regulate the populations of this insect (Pérez, personal communication6).

As for corn, borer damage Diatraea has been especially serious in the case of D. grandiosella Dyar between Mexico and the southern United States. The pest attacks young stems, causing population losses; attacks the formed stems, which causes their overturning; and it attacks the ears, which translates into a reduction in production and quality. The attack of this pest on corn stalks can decrease up to 29% of production; percentage that can reach 75% when the borers cause the fall of the stems (Rice, 2012). On the other hand, this last author states that the infestation of the ears deteriorates their nutritional quality due to the growth in them of saprophytic fungi and the production of aflatoxins. In the case of sorghum, Rice (2012) indicates that this pest can generate losses of up to 50%. In this regard, Huang et al. (2006) report that three species of borers can be found in the same maize field in Louisiana: Ostrinia nubilalis (Hübner) (Lepidoptera: Crambidae), Diatraea grandiosella y D. saccharalis. The same authors indicate that since the cultivation of maize genetically transformed with the endotoxin of Bacillus thuringiensis (Bt) it was possible to control the borer complex, and they raise the need to establish additional management measures to delay the moment when the pest becomes resistant to this agent, even more so if it is taken into account that D. saccharalis shows a lower susceptibility than the other two species. In the case of corn, these materials have been implemented mainly in countries such as the United States, Argentina and Colombia (Espinel et al., 2011; Fava et al., 2004; Huang et al., 2008; Rice, 2012); while in sugar cane the first record of use is in Brazil (Cristofoletti et al., 2018).

The species complex Diatraea so far it is restricted to the New World, distributed from the United States to Argentina. It is estimated that there are currently 41 species of Diatraea, of which the most widespread is D. saccharalis, but some of a local nature, depending on the country, also represent a problem for production, depending on the country (Vargas et al., 2015; Solís & Metz, 2016). According to Bustillo (2013), the adults are nocturnal moths, which rest on the underside of the leaves during the day (Figure 2). Females can extend their reproductive period for 3 or 4 days and preferentially oviposit on the underside of the leaves between 5 and 50 eggs. A female can lay between 250 and 500 eggs. The larvae feed on the yaguas of the leaves in their first stages of development (I to III instar) and later penetrate and bore into the stem, which they generally enter through a single point, but sometimes they exit and penetrate the stem through a new site; that is to say, the larva can drill several entry holes per cane –drill more than one internode–, but it will leave only one exit orifice and when it completes its larval development, it covers it with silk threads and cane fibers; and then molt for the last time before becoming a pupa near the end of the tunnel, where the moth emerges from the stem (Bustillo, 2013). 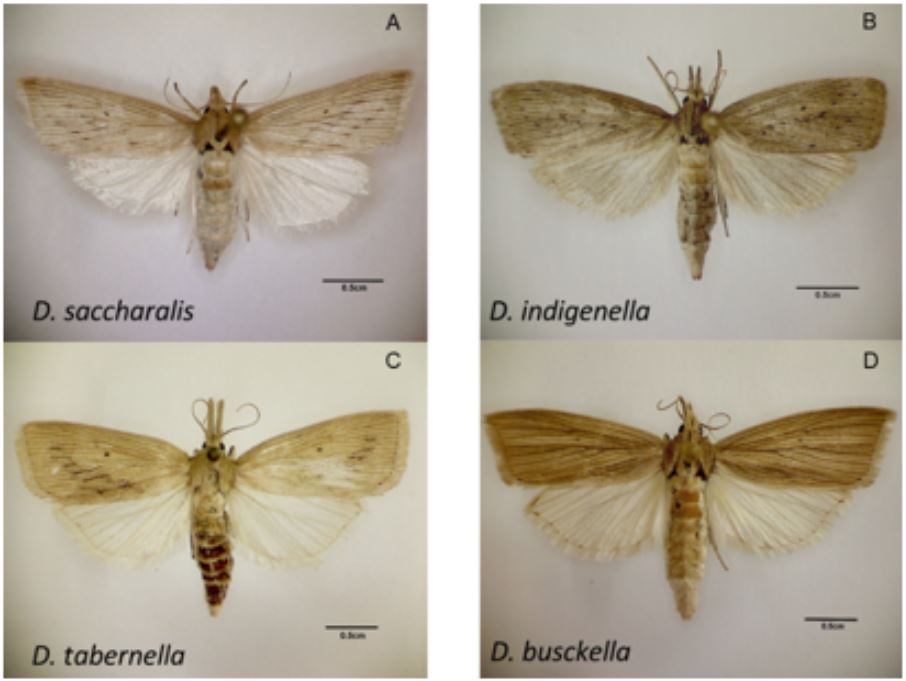 The damage caused by Diatraea spp. can be confused with the one that produces the minor borer Blastobasis graminea Adamski (Lepidoptera: Blastobasidae), which infests stems similar to larvae of Diatraea. However, due to the smaller size of B. graminea its perforations are smaller with usually irregular galleries, unlike Diatraea that tends to do them in a straight line; what's more, B. graminea drills a maximum of two internodes and Diatraea can pierce more than two. It should also be noted that the damage of B. graminea It is generally located in the area of ​​the node and in most cases it pierces the bud (Cárdenas, 1984) (Figure 3).

When Diatraea spp., as well as other borers, attacks young crops, the symptom called "dead heart" occurs, which leads to the death of the apical bud and from which the plantations generally recover if the damage does not persist for more than a month and if not affects most of the strains (Gómez & Lastra, 1995). The attack in more developed plantations is characterized by the internal destruction of the vascular bundles of the stem, which affects the flow of nutrients and photosynthates and therefore reduces the productive potential of the plant. In addition, the entry holes in the stem allow its colonization by fungi such as Colletotrichum falcatum W, which causes a symptom called red glanders or red rot that encourages the invasion of secondary pests such as seed weevils M. hemipterus (Bustillo, 2013), attracted by the fermentation of the affected parts.