Colciencias recognized the director of the Variety Program

For his career, scientific and academic production and contributions to science, technology and innovation in the country, Colciencias awarded the 'Emeritus Researcher 2016' award to Dr. Jorge Ignacio Victoria Kafure, director of the Cenicaña Varieties Program.

For his career, scientific and academic production and contributions to science, technology and innovation in the country, Colciencias awarded the 'Emeritus Researcher 2016' award to Dr. Jorge Ignacio Victoria Kafure, director of the Cenicaña Varieties Program.

Jorge Victoria joined the Colombian Sugar Cane Research Center in 1981 and since then he has led research that has contributed to the development of Colombian agribusiness.

“Between 1979 - 1983, the diseases of coal, coffee rust and mosaic produced great economic losses in many sugarcane producing countries. With the system developed by the Center for the sanitary management of these diseases, no Colombian grower had losses due to them; then Cenicaña made disease resistant cane varieties available to the sugar sector, with which it was possible to replace those susceptible ”, he recalls.

Since 2000, with his guidance, the Research Center has developed varieties for the semi-dry, humid and foothills environments of the Cauca river valley, and with his knowledge and experience he has also contributed to the training of new professionals: he was a professor at the Universidad del Valle, the ICA Graduate School - National University and the National University of Colombia, Palmira campus; He has supervised more than 20 undergraduate, master and doctoral theses and published articles in national and international scientific journals.

During these 35 years in the sugar sector the satisfactions have been many, such as "having formed a work team that is committed to offering benefits to the sector from its research areas", acknowledges the director of the Varieties Program. Jorge Ignacio Victoria is a native of the municipality of Tuluá, Valle del Cauca. He is an agronomist from the National University, Palmira campus; M.Sc. in Phytopathology and Improvement from Cornell University, USA; and Ph.D in Phytopathology and Bacteriology, from the University of Wisconsin, USA.

The 'Researcher Emeritus 2016' award was given to 76 Colombian professionals. Currently, there are 10,042 researchers and 4638 research groups recognized by Colciencias in the country. 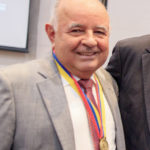 Colciencias recognized the director of the Variety Program