The distribution of the species of Diatraea In the Cauca River Valley, it confirms the importance of using the entire complex of available natural enemies preventively.

When in 2013 the discovery of two new species of Diatraea (D. tabernella y D.busckella) in the Cauca river valley, Cenicaña began to determine their distribution in the region. By 2016 it was established that:

"It is not about using only the most efficient or the most economical, but about combining those that are available, in such a way that they can protect us from the different species of DiatraeaWell, it is a mistake to think that tavern is from the north or busckella, from the center, and not prepare with controllers for all species ”, he points out.

For this reason, it is important to facilitate the adaptation of different natural enemies, so that when they are necessary they already exist in the area as an additional management actor. A good example is that of Cotesia flavipes that has become an option to combine with the flies and face D. tabernella.

"To do control over Diatraea we release tachyinids and Trichogramma exiguum, but as a result of the alert that was generated in the north of the Valley, we began to work preventively with Cotesia flavipes. This year we started with releases of half a gram per hectare and we are now going one gram per hectare; in addition, we are venturing into the breeding of cotesia at the laboratory". 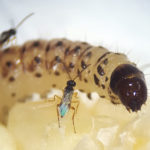